This silk tie is tied with a four in hand, the only tie knot I know. Any advice on other knots that would work within MB principles with this (or another straight) collar?

It just doesn't grip together like other ties that have a bit more texture. It's a printed silk from Brooks Brothers (pic attached).

Heaven help us if we resort to a Windsor.

A: David, have you considered Scotch tape?

There is certainly nothing wrong with a little slippage at the knot; in fact it's preferred. Take a close look at the mandeer and you'll see a looseness similar to yours. It's artful dishevelment, a core MB principle. Contrast this with, say, Donald Trump's too-straight tourniquet. As the de facto leader of Toolbag Nation, whatever he does, do the opposite. 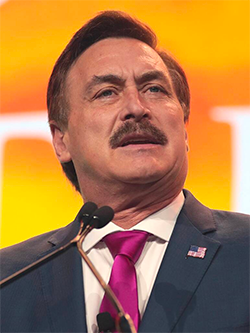 The bigger issue with shiny silk ties – besides violating the MB matte vs. gloss principle – is that they give off strong old white man vibes, and none of the good ones. There's Trump, of course, but also take a look at the My Pillow Guy, Senate leadership, or a local Rotary Club meeting. (Now imagine the smell of the excessively-applied cologne. P U!)

Stick with your point collars and four-in-hand knots, David. Donate the printed silks to Goodwill and get into textured neckwear. We have a bunch of options, and it's all we've ever made.

Q: I have a summer wedding to attend and have a grey zzegna cotton suit. I am not sure what shoes to pair it with as the pants are quite narrow. Please help.
—John


A: With the notable exception of the recent Kim Kardashian/Kris Humphries wedding, which featured $5 million earrings and an absurd, six-foot-tall sex toy made out of wedding cake, summer weddings are casual. So your choice of a casual cotton suit is a good one.

In his highly entertaining (and highly recommended) book How to Be a Man GQ Style Guy Glenn O'Brien says:

"...the fashion-forward periodically tell us it's OK to wear sneakers with a suit. Maybe if you've been embezzling and the auditors are in the office, sneakers will give you an edge if you make a run for it, but basically sneakers with a suit is a fundamental error, no matter how much the sneakers cost or who designed them."

We disagree. Or maybe it's just that we have more expansive definition of "sneaker" than O'Brien does. In any case, we think these textured leather sneakers from Thompson would be perfectly wedded to your Z Zegna suit. Despite their Anglo-sounding name, they're actually made in Italy — like your suit — and their narrow cut will pair well with your narrow pants.

If, however, you fall more in line with the Style Guy's way of thinking, then go for these suede Gucci lace-ups. They're dressier than the Thompsons, but with their relaxed lines and non-glossy finish, you won't look like you just came from a wedding when you hit the bars after the reception ends.

Stir over ice, strain into a chilled cocktail glass, and garnish with a cherry.