Hi! Is there a puffer vest that you all recommend? Maybe a couple of different brands? I know you recommended Duvetica a few years ago. Are they still your #1? Other brands? Thank you!
—Chris

A: Thanks so much for the question, Chris. We could go on forever about puffer vests as they're a wardrobe staple.

One warning before we list some options: these best suit taller, thinner MBs. If you're carrying a little extra bulk in your torso, the last thing you want to do is add bulk to your torso while the rest of your body keeps the same thickness. You will just look fatter.

With that caveat, we have three rules on puffer vests. They must:

1. Be filled with down. Goose is better than duck.
2. Have a collar (but not a hood)
3. Have some sort of elastic, whether it's the armholes or the waist. Both is better.

Here are a few for your consideration. 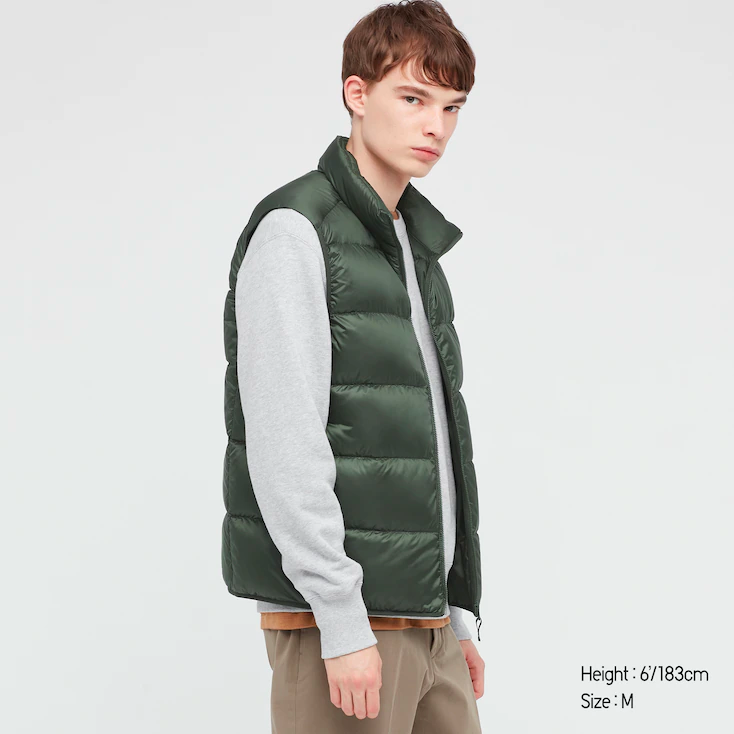 Uniqlo Ultra Light Down Vest. $49.99.
If you are merely puffer vest-curious and want to see if they're for you, by far the best gateway is Uniqlo's Ultra Light Down Vest. At just 50 bucks there is no better overall value. Uniqlo fits true to size but this is cut larger. Size one down. Gamefacing like the model is not allowed. Hey kid, you're in a $50 vest.

Aspesi Slim RE Down Gilet. $312 (from $520).
If we had to pick one puffer vest, this is it. Minimal, oozes quality, and has all the features: goose down, adjustable elastic hem, lycra armholes, zip pockets, and an interior zip pocket. Probably because Aspesi is based just a few miles from the Alps, these are packed with feathers and target US cocktail zone 5 and higher. If you are in a warmer cocktail zone it's likely overkill. Has long since replaced Duvetica as our top pick. Aspesi vests fit true to size. 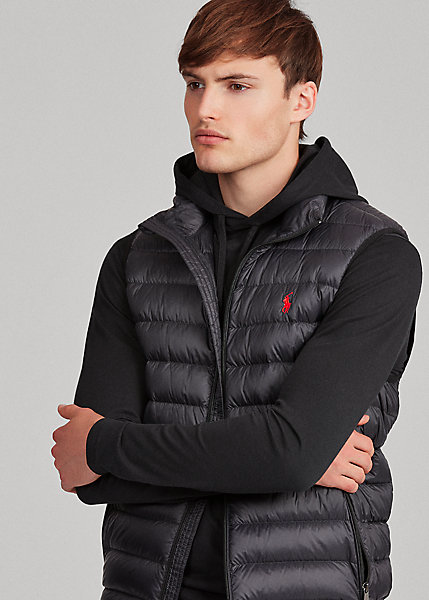 Polo Packable Water-Repellent Down Vest. $169.
We're not normally one for logos but this polo player is retro, iconic, and lacks legibility. A better choice for warmer cocktail zones — or traveling to them — as it's lightweight enough to pack into itself. What's with the gamefacing? Again, not allowed, even at $169. Polo is a shade big. For our Polo puffer vests we go one size down.

In 2016 we made an unimpeachable case that Donald Trump won the GOP nomination primarily because voters were raging against establishment casual and casting ballots against anyone wearing a zip mock neck sweater.

That Republican Glenn Youngkin won a blue-state gubernatorial race clad in a fleece vest means that L.L. Bean is again a safe space for 2024 GOP hopefuls.

We predict that Donald Trump — ever the follower — will soon appear in meekly-rolled sleeves, a yellow Ashli Babbitt cause bracelet, and zippered fleece of some kind.

Next week: How to pick a vest that doesn't make you look like Glenn Youngkin.

Q: I teach at a college in the extremely Deep South — think swamps and alligators. I'm pretty happy with my general look, jeans or slacks with a woven button-up and a tie. Dress here is pretty casual; I think I'm the only faculty member who wears a tie. So, any suggestions on adding some variety to my look? Blazers or sweaters would be the solution, but it's too hot for any kind of jacket at least 8 months out of the year here.
—Charles

A: While actually wearing a blazer in the blazing heat might not be an option, have you considered simply carrying one?

In our all-time favorite noir Body Heat, William Hurt rocks the look often during an especially severe Florida heat wave. (Although that was 1981, when the Keeling Curve was at a mere 335 ppm.)

If your arms are already full, consider a vest. While we're not on record endorsing vests — except for down-filled puffy ones — there is strong visual evidence that it works well for an educator like yourself.

Even if you don't look like Bradley Cooper, a vest would offer the variety you are looking for, mixing textures and patterns with your ties and wovens. As usual, try YOOX for a bunch of options. Let us know how it works out ... and keep that watch 40mm or smaller like Cooper does here!

Our annual pilgrimage to Lambeau is expected to be colder than we were expecting, with a high of just 52 and low near 40. So we're getting dressed. (As always, check Pourcast to determine what cocktail to be consuming at any day and any time at any place around the globe.)

1. Pants. The best 5-pocket corduroy pants we've ever worn are Uniqlo's Slim Fit Corduroy Jeans. Indeed, you have to be slim and fit to wear these, but as the product description says, they do in fact "create slender, fashionable lines," work during the week, and have the versatility to play on Sundays. We're wearing them in off white. A tremendous value at just $39.90. They're vanity sized about 1 inch in the waist (so size down).

2. Belt. A critical element of our understated fandom gameplan is our own Game Day Belt. Made from the same Horween leather that's used to make the official NFL footballs, and constructed right here in the Twin Cities. Fits perfectly true to size.

3. Shirt. Five years ago we all got this Red Jacket long sleeve anti-jersey and they're still playing in the league. Yes, there is some legibility on the back, but it's the name of perhaps our favorite Packer and MB archetype Paul Hornung, famous less for his football than for his womanizing, drinking, and gambling. Fits true to size. (Lots of other options available from Mike Ditka to Johnny Unitas.)

4. Shoes. Sneakers and exposed ankles are usually the play call for mid-October Packer games, but given the forecast we're audibling into ankle boots. Since our all-time favorite TST chukkas have seemingly gone the way of Peyton Manning's arm strength, we're substituting them for these Joyks with beautiful thick white rubber whitewalls. (We may additionally substitute free-agent white laces.) Fits fractionally small.

5. Vest. We have a thing — bordering on fetish — for goose-down puffer vests. 313, Montecore, and Marville provide the best value, but if you have the cash Duvetica is the way to go. This version — along with a Hall of Fame headbuzz — will stiff-arm the dramatic post-game cool-down, and the blue-and-gold color combo is a subtle, tasteful nod to the Packer throwback jerseys (which the team will be wearing on Sunday). We always size down one for puffer vests, and this is no exception.

Q: I'm starting a new school year on Tuesday and want to know: what does an MB teacher wear?
--Eric


A: As is often the case, movies hold the answer. You want to set yourself apart from the Phys. Ed. teacher, but not go too dressy in the direction of Mr. Hand or Ben Stein's famed economics teacher; it's a slippery slope towards administration, or Looking Like Principal Richard Vernon.

While this was the least believable movie role since Denise Richards played a nuclear physicist in The World is Not Enough, Bradley Cooper's artfully disheveled prep-school teacher in The Hangover strikes a fine balance: vest (one size smaller than normal), sleeve-rolled chambray work shirt, undone repp tie, accessorized with a vintage watch in a black nylon band.

Q: I have a matching gray vest and suit jacket that was once part of a three piece (the pants ripped). Is it MB to wear the top two pieces with pants of a different color? Perhaps black pants? Please advise.
--Gideon


A: No, don't do that. In fact, don't even hang the jacket and vest near each other in your closet. Their relationship is over.

We're not huge fans of this look, but you can salvage the vest by pairing it with denim and a white shirt. The jacket, on the other hand, is probably a lost cause. Since it was once part of a 3-piece suit, it's almost certainly not going to have a cut that works with denim. And combining with dress slacks is a look that should be left to middle-aged men attending Sunday service. Feel good about yourself and donate that jacket to the nearest Salvation Army -- it will help some recently laid off Christian maintain his churchly style even in the midst of financial hardship.

Q: What is your feeling about vests? I have a green herringbone piece I picked up at a thrift store. It seemed to go over real well with the ladies at happy hour last Friday. It was accompanied by a shirt and tie of course.
—Concerned Citizen

A: This is part of the well-known Justin Timberlake Effect. Based on the chicks' reactions, it sounds like you executed this look successfully, which ain't easy given the fairly high degree of difficulty (not to mention the green herringbone). Savvy MBs should proceed with caution; others are probably better off leaving it to the King of Pop. Even without 15 pieces of flair it's easy to veer towards Stan, the manager at Chotchkie's.