If our math is right, we've spent just $911 of someone else's money (from a $2K budget), creating 64 wardrobe combinations for our client (Dave) to wear before a repeat. Considering days off for Thanksgiving and XMAS/NY, that about covers an entire F/W workday season!

This economization was intentional, so we can go apeshit on shoes. They're the most important element of style, and even in our post-dress shoe, sneakerized world the cliche holds: shoes make the man. Additionally, according to research done by Allen Edmunds, they also make it easier to get a date.

1. Pantofola d'Oro Suede Sneakers. $213.
PdO has been making shoes in central Italy since 1886 and made understated sneakers for years before Common Projects and their copycats came on the scene. This minimal grey suede version works very well with the uniform.

2. Maison Margiela "Replica" Suede and Leather Sneakers. $470.
The most signature item to date, these MMs are nearly 25% of the client's overall budget, which is still a value given their sartorial punch. They also may get Dave laid.

See how both pair look with the rest of the uniform in the updated Dresserizer. Spoiler alert: Awesome!

We Threw These Back. Er, Sort Of. 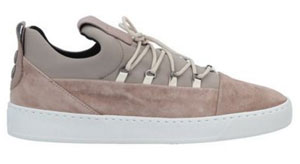 You may recall the client's creative brief called for an "urban landed gentry" look. That sort of went out the window when he settled on Levi's 505s, but we gave it a nod with the purchase of these made-in-the-UK Alexander Smith sneakers. They turned out to be a wee bit too adventurous for our client, so we kept them. Now we're investing more of our own budget into Alexander Smith.

As noted above, $911 has been spent on clothes, and now $683 on shoes, bringing the total to $1594, including all shipping and returns. That leaves us with $406 for accessories, which are the last part of the build, and is coming up next.

This is where we're at, and likely what we recommend for you, too.

We're always on the lookout for uncommon plaids to put into the rotation with ginghams under solid blazers, cardigans, and the rare crew. Throw in a point collar — which is practically on the endangered species list — and we're usually sold, even at full boat.

We've had our eyes on these two Alex Mill examples for months, but based on the wide range of sizes available, wagered on waiting until Barney's Warehouse decided to blow them out, as they are now: originally $155, reduced to $47.40 with free shipping. All sales are final but these fit true to size.

With the Cardinals 3-0 win over the Cubs on April 2nd, white pants season officially started. For us they're already on a rotation heavier than a starting pitcher, and with a life expectancy about as long as a doubleheader, we're always looking to stock the bullpen.

Three strikes and we're out?

Yes. But let us first present the MB Deal of the Week: Brooklyn Tailors White Denim Pants. Originally $205, marked down to $69, and now just $34.50 (+ free shipping) these pants are made in BkT's Kathmandu, Nepal factory, where they're usually busy making suits and dress shirts. So we expect a more tailored construction, and paired with the countervailing force of denim, a switch-hitting pant we can wear to both the office and a matinee.

We have been watching this Jil Sander collar for what feels like years now, wondering who might pay $1480, then $589, and now $147.25 for this item. On the one hand, we were conceptually intrigued by Sander's merchandising innovation — she was trying to appify or unbundle something that had traditionally been considered a part of a shirt or jacket rather than a standalone accessory. On the other hand, there was the item itself, which always made us think, "Damn. Somewhere, there's a really toolbaggy, circumcised leather jacket walking around." Now, months later, the snipped foreskin, er, collar, can be had for a 90% discount. And yet sizes S, M, and L are still available. Verdict: Unsafe at any price!

As our archives can tell you, we don't necessarily think bow ties should be illegal or even heavily regulated. But we do think you should wear them only in certain situations, namely summer weddings and black tie.

That said, we love this beaver fur bow tie from Vanities. In general, bow ties aim to convey the wearer's unique sense of style in a playful, unexpected, and attention-getting way, usually by using bright colors and/or vivid patterns. This fur bow tie, however, is simultaneously over-the-top and engagingly understated.

Even on sale at Barney's Warehouse, it's a little pricey. But don't think of it as a $169 bow tie. Think of it as the only bow tie in the world that can credibly double as a luxury shaving brush.

Speaking of cocktailing, a lot like a virus, skulls are infecting our drinks with these silver-plated skull swizzle sticks from D. L. & Co. Is nothing sacred?
Barney's has decided to put a shitload of stuff on sale and we suggest diggin' in. Don't miss the chance to get into a pair of John Varvatos boots for less than $300. Black boots are an MB closet staple, and this side-zip model is an excellent choice.

The Barney's sale is also an opportunity to get ball-warming, 5-pocket pair of bootcut moleskin pants from Tony Melillo.

Finally, Saks is having a nice early fall sale with free shipping on every order.

Last week we headlighted, er, highlighted a Paul Smith naked lady keychain, and now Barney's Co-Op cut the price of his sterling-silver version in half.

The classic Negroni is simply equal parts gin, Campari, and sweet vermouth. You can do better.

Quick shake or stir and pour into chilled Martini glass. Garnish with an orange twist.